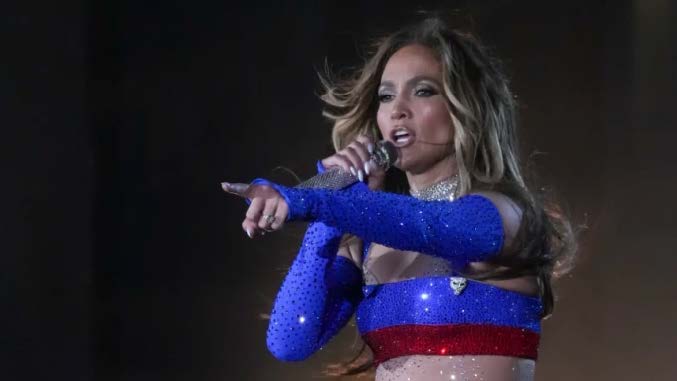 The Los Angeles Dodgers Foundation celebrated its sixth — and due to the pandemic, first since 2019— Blue Diamond Gala on Thursday night, with a who’s-who of L.A. sports stars and a headlining set from Jennifer Lopez.

The event, dubbed “The Party for L.A.,” raised a record-breaking $3.6 million for LADF, which aims to improve education, health care, homelessness and social justice for all Angelenos and, since 1995, has invested more than $40 million in programs and grants to nonprofits throughout the city. The gala also feted LADF’s “Everyday Champions,” whose work in the community was hindered by theCOVID-19 pandemic but who were able to step up to the plate and make a difference.

Nearly the entire Dodgers roster was on hand for the event, including stars Clayton Kershaw, Mookie Betts, Justin Turner and Cody Bellinger, as well as manager Dave Roberts. Venus Williams, Dodgers controlling owner Mark Walter and L.A. Lakers owner Jeanie Buss were also in attendance.
Mario Lopez and former Dodger Adrián González served as emcees for the evening, which kicked offwith a dinner and pre-party outside of Dodger Stadium before taking the celebration to the field. DJ D-Nice spun inside the ballpark as guests were able to walk around (and hit the bar) in the outfield.Ahead of JLo’s performance, LADF CEO Nichol Whiteman took the stage for a brief speech.

“This year’s gala reflects our endless potential when we combine our efforts and insist on making adifference in the lives of those who need us most,” she said. “It is no mistake that we stand on thismagical field, this field of dreams, where our Boys in Blue won the 2020 championship. In that life-
Jennifer Lopez Takes the Stage at L.A. DodgersFoundation Gala, Helping to Raise $3.6 Million altering year, we showed the world that we are champions on and off the field. We helped some of the most vulnerable communities survive an avalanche of uncertainty and pain. “Tonight, we honor our comprehensive work but we also recognized the individuals who voluntarily jumped into the unknown, pushed past fear, to help Angelenos navigate these trying times,” Whiteman continued. “When so much of the world shut down, these heroes stepped up.” Walter and Buss also appeared on stage to auction off dueling 2020 championship rings from both the Dodgers and Lakers, with Buss promising, “This will get you into any club.” For the final hour of the gala, Lopez took the stage for a stadium-worthy concert, performing her hits amid five costume changes and elaborate choreography with a dozen backup dancers. The star — fresh off of her Netflix documentary Halftime, following her 2020 Super Bowl performance — also brought one of her children out for a duet.

After the Bronx native teased, “I know we’re in L.A. but I’ve got to keep it New York forever,” with some of her N.Y.-centered tunes, Lopez told the crowd, “This is a big night for all of y’all, and a big night for me too.”

“They told me that 8.8 million children’s lives are touched by this foundation every year. Give yourselves a round of applause, a pat on the back,” she later added. “We all know that children are going to take over this world and we need to take care of them, raise them right, teach them how to give, give them what they need, and to help one another. That’s really why you’re here tonight.”

At Woodcraft Rangers, we’ve been guiding young people as they explore pathways to purposeful lives for nearly 100 years. We offer summer day and residential camps and afterschool learning opportunities for kids in around Los Angeles, CA.